Year - Volume - Issue
2022, volume 3,
Issue 2
Authors
Elizaveta I. Bon, NataliyaYe. Maksimovich, Iosif K. Dremza, Mariya A. Lychkovskaya, Iya N. Burak
Heading
Pathologic Physiology
Article type
Original article
PDF File
Saratov_Med_J-2022-0203.pdf
Abstract
Objective: to conduct a comparative analysis of mitochondrial respiration in brain homogenates of rats with stepwise incomplete cerebral ischemia (SICI) with varying duration between ligations of both common carotid arteries (CCA).
Material and methods. The experiments were performed on 24 male mongrel white rats weighing 260±20 g. All rats were distributed among three subgroups. Cerebral ischemia was simulated under intravenous thiopental anesthesia (40-50 mg/kg). The control group (n=6) comprised sham-operated rats of similar gender and weight. To study mitochondrial respiration, the brain was extracted in the cold environment (0-4 °C), dried with filter paper, weighed and homogenized sensu the modified technique in an isolation medium containing 0.32 M sucrose, 10 mM Tris-HCl, 1 mM EDTA, pH of 7.4 (in a ratio of 1:10), using Potter – Elvehjem homogenizer with Teflon pestle.
Results. SICI with an interval of 1 and 3 days between ligation of both CCA led to neuronal damage in the parietal cortex and hippocampus of rats, which manifested itself in a reduction of the neuron size, deformation of the perikaryons, an increase in the number of shrunken neurons and shadow cells. The most pronounced changes were observed in the subgroup with one-day interval between ligations. These changes were similar to the changes in incomplete cerebral ischemia (ICI) (p=0.07), except for the absence of cells with pericellular edema in the hippocampus and a smaller number of those in the parietal cortex. ICI with seven-day interval between ССА ligations, on the contrary, was manifested by less pronounced histological changes, especially in the hippocampus.
Conclusion. Comparative analysis of mitochondrial respiration in brain homogenates revealed that the severity of brain damage in SSIC depended on the interval between blood flow arrest in both CCA. At the same time, the highest level of energy metabolism disorder was observed during CCA ligation with an interval of one day, which implied insufficient implementation of compensatory mechanisms.
Keywords
cerebral ischemia,
mitochondria,
brain homogenates
Cite as
Bon LI, Maksimovich NYe, Dremza IK, Lychkovskaya MA, Burak IN. Changes in respiration of the mitochondrial fraction of brain homogenates in rats with stepwise incomplete cerebral ischemia. Saratov Medical Journal 2022; 3 (2): e0203.
CID
e0203

Mitochondria play а crucial role in the life of every cell. Their most characteristic feature is the presence of numerous enzymes involved in oxidative phosphorylation and energy supply to the cell [1-5]. Besides, mitochondria are involved in storing and transmitting hereditary information, apoptosis and various metabolic processes [6-9].

The еnеrgy requirements of the brain, necessary for normal functional activity of neurons (approximately 1,046 J or 250 саlоries per minute) are provided at large (95%) via aerobic glycolysis [1, 7, 10-12]. Because the chief way of obtaining energy in the brain is aerobic breakdown of glucose, its need for oxygen, compared with other organs, is extremely high [13, 14].

Most of conducted studies were devoted to examining the pathogenesis of cerebral ischemia [1, 15-17], whereas insufficient attention was paid to the mechanisms of brain compensation.

When modeling severe forms of cerebral ischemia (total and one-stage incomplete), compensation mechanisms are absent due to the development of deep hypoxia [1, 16]. The study of the compensatory mechanisms is possible on the basis of evaluating changes of energy exchange in rats with SICI via alternate ligation of both CCA with different time intervals between the ligations.

Objective – to carry out a comparative analysis of mitochondrial respiration in brain homogenates of rats with simulated SICI with varying duration between ligations of both CCA.

The experiments were carried out on 24 male outbred white rats weighing 260±20 g in compliance with the Directive of the European Parliament and of the Council No. 2010/63/EU of 22 September, 2010 on the protection of animals used for scientific purposes. Protocol of the Ethics Committee at the Grodno State Medical University No.1 of 30 January, 2018.

SICI was performed by sequential ligation of both CCA with an interval of 7 days (subgroup 1, n=6), 3 days (subgroup 2, n=6) or 1 day (subgroup 3, n=6) [4]. The sampling of brain material was carried out 1 hour after ligation of the second CCA in each subgroup.

The control group included sham-operated male rats of similar weights (n=6). To study mitochondrial respiration, the brain was removed in the cold (0-4 °C), dried with filter paper, weighed and homogenized in an isolation medium containing 0.32 M sucrose, 10 mM Tris-HCl, 1 mM EDTA, pH 7.4 (in the ratio 1:10) using a Potter – Elvehjem homogenizer with a Teflon pestle in accordance with a modified technique [18, 19].

Mitochondria were isolated by differential velocity centrifugation. The nuclear fraction was separated by centrifugation at 600 g for 10 min (4 °C). The resulting supernatant was centrifuged at 8,500 g for 10 min (4 °C), the mitochondrial pellet was washed twice in the isolation medium and resuspended until a protein concentration of 35-40 mg/mL in the isolation medium and stored in a short tube on ice. Protein concentration was determined by the Lowry protein assay [18].

To examine mitochondrial respiration, a concentrated suspension of mitochondria was introduced into a sealed polarographic cell (placed in a thermostat) with a volume of 3.0 mL, containing an incubation medium in an amount providing an ultimate protein concentration in the cell of 1 mg/mL. The incubation medium for registering mitochondrial respiration contained 0.17 M sucrose, 40 mM KCl, 10 mM Tris-HCl, 5 mM KH2PO4, 8 mM KHCO3, 0.1 mM EDTA, pH of 7.4.

The principle of polarographic cell operation was based on the registration of oxygen uptake by mitochondria using the built-in Clark electrode at a temperature of 25 °C (Figure). 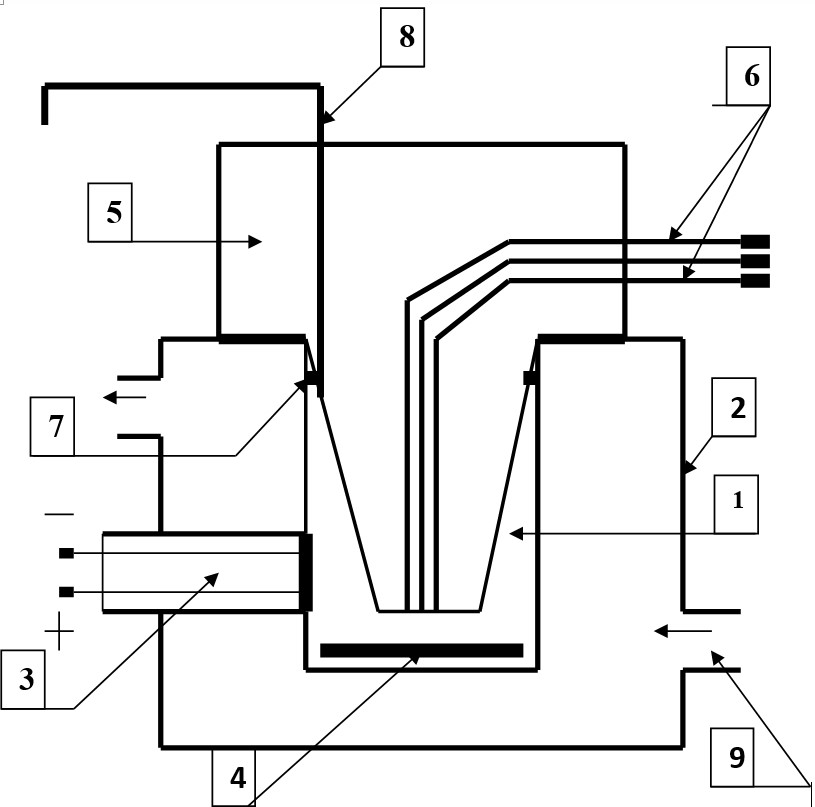 Figure. Polarographic cell for studying the respiratory activity of mitochondria:

Registration of changes in the partial pressure of oxygen (pO2) in the mitochondrial suspension was conducted using an electronic recorder KSP-4.

The Clark electrode was calibrated by consecutively blowing air (pO2 of air) and gaseous nitrogen (pO2=0 mmHg) through the cell.

After registering the rate of basal (endogenous) respiration in the absence of a substrate (V1), respiratory substrates (2 mM malate/5 mM glutamate, or 5 mM succinate) were alternately administered into the mitochondrial suspension, and then ADP in an amount of 200 nmol/mL was introduced. On the basis of the obtained polarograms, the mitochondrial respiratory rates in different metabolic states and the coefficients characterizing the coupling of oxidation and phosphorylation processes were calculated.

Use of dissolved substrates of succinate and malate/glutamate complexes helped assessing the degree of functional activity of the electron transport chain (ETC) in mitochondria as a whole, in particular, of the ETC complexes I and II.

To prevent systematic measurement errors, brain samples from the compared control and experimental groups of animals were studied under the same conditions.

As a result, quantitative continuous data were obtained. Since the experiment used small samples with non-normal distributions of individual values, the analysis was carried out via nonparametric statistics using the Statistica 10.0 licensed computer program for Windows (StatSoft Inc., USA). Our data are presented as Me (LQ; UQ), where Me stands for the median, and LQ and UQ are values of the lower and upper quartiles, respectively. Intergroup differences were considered significant at p<0.05 (Kruskal – Wallis test with Bonferroni’s correction).

SICI with an interval of 1 and 3 days between ligations of both CCA led to the damage of neurons in parietal cortex and hippocampus of rats, which manifested itself in their size reduction, deformation of perikaryons, an increase in the number of shrunken neurons and shadow cells. The most pronounced changes were observed in the subgroup with one-day interval between ligations. These changes were similar to the changes in incomplete cerebral ischemia (ICI) (p=0.07), except for the absence of cells with pericellular edema in the hippocampus and their smaller number in the parietal cortex. ICI with a 7-day interval between ССА ligations, on the contrary, was manifested by less pronounced histological changes, especially in the hippocampus.

In the course of studying the respiration in the mitochondrial fraction of SICI rat brain homogenates, the following data were obtained. In the subgroup 1 of ICI rats, we observed an increase in V2 by 46% (39; 56) in the presence of malate/glutamate, compared with the control group (p<0.05). Similar comparison yielded 56% (51; 63) increase of RCR (p=0.02, implying the activation of proton transport through the АTР synthase complex. Other indicators did not change (p=0.07), as seen in Table.

Table. Indicators of respiration in the mitochondrial fraction of brain homogenates in rats with stepwise incomplete cerebral ischemia when using malate/glutamate and succinate substrates, Me (LQ; UQ)

There were no differences in V1, V2, V3, V4, RCR, ACR and phosphorylation ratio when using different substrates (p>0.05), which indicated equivalent consequences of changes in both complexes (I and II) of electron transport.

A reduction in the values of V2, V3 and V4 indices, and in the RCR in the subgroup 3 of SICI rates was indicative of the damage to electron carriers in mitochondria and enzymes of the Krebs cycle, which, in turn, led to a decrease in energy production, as evidenced by a low phosphorylation ratio.

Compared with the subgroup 2, in the subgroup 3 of the SICI rats, in the presence of both substrates, the respiration indices in the mitochondrial fraction of brain homogenates did not change significantly (p>0.05), which implied the equivalence of disorders in electron transport complexes I and II in subgroups 2 and 3 of SICI rats.

Among the leading pathogenetic mechanisms of ischemic brain damage, we should mention a dysfunction of complex I (NADH-dehydrogenase complex) in conditions of oxygen deficiency, a decrease in NADH oxidation and inhibition of the Krebs cycle.

As shown earlier, with ligations of both ССА 3 days apart, the histological changes were not as pronounced as in the subgroup 3, and no cells with pericellular edema were observed. When blood flow in both CCA was stopped 7 days apart, the pathological changes were even less noticeable: the ratio of neurons sensu the chromatophilia degree of their cytoplasm and the size of the neuronal perikaryons differed insignificantly from their values  in the control group.

In the same animals, the respiratory parameters in the mitochondrial fraction of brain homogenates have normalized, and some even exceeded the control values, which could be explained by the onset of various compensatory processes: an increase in the synthesis of cytochromes, Krebs cycle enzymes. Mitochondria were formed, their cristae were restored, and the efficacies of the processes of oxygen utilization, substrate oxidation, and their delivery to the mitochondria were increasing. Due to morphofunctional changes, restructuring of mitochondrial enzyme complexes, and activation of oxidation and phosphorylation enzymes, an increase in the degree of coupling of the oxidation and phosphorylation processes in adenine nucleotides (ADP, AMP, creatine) was observed. Other important observed processes included an activation of the glycolytic oxidation pathway, an increase in the synthesis of nucleic acids and proteins, a cost-effective use of oxygen and metabolic substrates in biological oxidation reactions and catabolic processes, an increase in the efficacy of anaerobic ATP resynthesis reactions and the activity of anabolic processes.

Hence, our study demonstrated the dependence of brain damage severity in SICI on the interval between blood flow arrest in both CCA. The activation of compensatory mechanisms occurred during the seven-day interval between ССА ligations. These compensatory mechanisms prevented the development of major energy exchange disorders, leading to the less pronounced morphological disorders and a smaller degree of neurologic deficit.

However, the maximum energy exchange disorder was observed in the course of CCA ligation with one-day interval, which indicated the insufficiency of compensatory mechanisms implementation.

Conflict of interest. The authors declare an absence of apparent and potential conflicts of interest related to the publication of this article.

Funding sources. State scientific program, “Examining the Processes of Brain Damage and Adaptation During its Ischemia and Use of Correction”.

References
About the Authors