Implant-associated inflammation remains one of the main causes of unsatisfactory outcomes in primary knee arthroplasty [1], which is associated with pathogenetic peculiarities of this typical process, characterized by formation of a microbial biofilm protecting infectious agents due to the polysaccharide complex formation from the effects of nonspecific and specific immunity, as well as from antibacterial pharmaceutical drugs [1, 2]. Differential diagnosis between infectious complications and aseptic loosening is often problematic due to several factors: the difficulties in microbiological verification of the pathological process, the need for bacterial examination of aspirate or intraoperative samples from periprosthetic tissues, and slow growth of the causative agents of implant-associated inflammation [3]. Quite often, infectious complications caused by low-grade pathogens, such as Staphylococcus epidermidis, are mistakenly regarded as aseptic loosening [4, 5].

Gram-positive cocci often cause early postoperative infection [6]. The widespread distribution of methicillin-resistant staphylococcus strains (MRS infection) obstructs the curative therapy of periprosthetic infectious complications due to resistance to β-lactam antibiotics and other classes of antibacterial drugs. Late infectious complications are caused as frequently by both Gram-positive aerobic cocci and Gram-negative aerobic and anaerobic bacteria. Currently, special attention is paid to the role of microbial associations and polymicrobial etiology of suppuration after arthroplasty [6].

To select an effective antimicrobial therapy, it is important to identify the so-called difficult-to-treat (DTT) pathogens due to the fact that the choice of effective antibacterial preparations against the microbial biofilm is extremely limited [6, 7].

Considering the pathogenetic peculiarities of implant-associated inflammation, it is proposed to take into account, along with the minimum inhibitory concentration (MIC), some more significant indicators, such as the minimum biofilm eradication concentration (MBEC) [7].

Our objective was to investigate the etiological role of opportunistic microflora in the pathogenesis of implant-associated inflammation in patients after the primary knee arthroplasty, along with antibiotic sensitivity testing of the major groups of pathogens.

We conducted a retrospective analysis of microbiological studies based on clinical material samples from 383 patients of the Research Institute of Traumatology, Orthopedics and Neurosurgery of Saratov State Medical University treated from 2014 to 2017 for implant-associated inflammation that developed within 1-12 months after the primary knee arthroplasty. The identification of microorganisms was carried out using conventional techniques (the Order of the USSR Ministry of Healthcare No. 535). Clinical material (wound drainage, aspirate, intraoperative samples of periprosthetic tissues) was plated on selective and differential diagnostic nutrient media. We then studied morphological and cultural characteristics of microorganisms, along with their tinctorial properties. Microorganisms were identified using the BD BBL ™ Crystal ™ auto-reader microbiological analyzer (, ), and the panels: Crystal TM Enteric/Nonfermenter ID Kit, Crystal TM Gram-Positive ID Kit (). The sensitivity of microorganisms to antibacterial drugs was determined by the disk diffusion method (Guidelines 4.2.1890-04 Testing Microbial Sensitivity to Antibacterial Medicinal Drugs) using Mueller Hinton Agar (Becton Dickinson, USA) and Sensi-Disc TM antimycobacterial discs (Becton Dickinson, USA). Methicillin resistance was detected using MeReSa Agar Base – MRSA Alert TM Kit (). Densi-La-Meter (PLIVA-Lachema Diagnostika, ) was used for sample preparation.

Statistical data processing was performed using the IBM ® SPSS ® Statistics 20 software package. The data largely deviated from the law of normal distribution; hence, the relationships between qualitative features were established via identifying the contingency among them, for which purpose the χ2 statistic was determined. The statistical significance was recognized at p<0.05.

The analysis of the etiological structure of infectious and inflammatory complications after the primary knee arthroplasty demonstrated a sufficient microbial diversity of various taxonomic groups. The total of 695 samples from 383 patients were examined over 2014-2017. We noted that 48.3% of the studies isolated a monoculture of microorganisms, 16.9% of them discovered a microbial association, and 34.7% of the samples did not yield any bacterial growth. As part of microbial associations, S. aureus was predominantly isolated in combination with Gram-negative non-fermenters or yeast-like fungi of the genus Candida.

The structure of sampled microflora was dominated by Gram-positive cocci, which accounted for 63.5% of cases. Staphylococcus strains accounted for 53.9% of cases, of which 34.8% of isolated strains (S. aureus) were coagulase-positive; 19.1% were S. epidermidis strains. Other microorganisms belonging to Gram-positive cocci (Streptococcus spp., Enterococcus spp.) were less common (9.6%) (Figure 1). 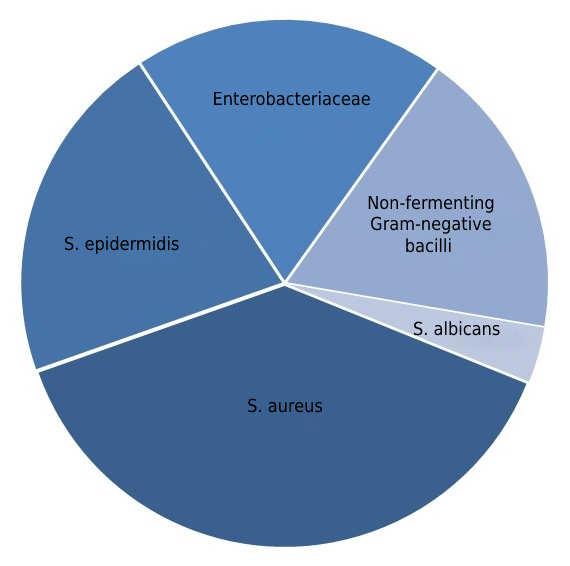 Figure 1. Etiological structure of major causative agents of infectious and inflammatory complications, presented in the form of a monoculture

Representatives of Gram-negative flora were found in 33.4% of cases. Among them, the most frequently detected microorganisms belonged to the family Enterobacteriaceae (17.3%). High species diversity of Enterobacteriaceae isolated from patients with purulent complications was revealed: over 14 species. The main representatives of enterobacteria were E. coli (12.8%) and Enterobacter spp. (4.5%), other representatives (Klebsiella spp., Kluyvera spp., Proteus spp.) were much less common. Non-fermenting Gram-negative bacteria occurred in 16.1% of cases, among them P. aeruginosa strains and Acinetobacter spp. accounted for 12.8% and 6.7%, correspondingly.

It should be emphasized that the proportion of Enterobacteriaceae among the representatives of Gram-negative flora increased in 2016-2017 by 12.7% versus 2014-2015 (χ2=6.19; df=2; p<0.05). Particular attention should be paid to Gram-negative non-fermenters of the genus Acinetobacter: although detected in just 6.7% of cases, all of their isolated strains were multiresistant.

Yeast-like fungi of the genus Candida were isolated sporadically (3.1%) as an independent causative agent of implant-associated inflammation; they were found in microbial associations in 38.3% of cases.

We carried out an antibiogram analysis of 161 staphylococcus strains isolated from patients with infectious and inflammatory complications after primary knee arthroplasty. The sensitivity of microorganisms to 17 antibacterial drugs of seven classes was studied (Figure 2). 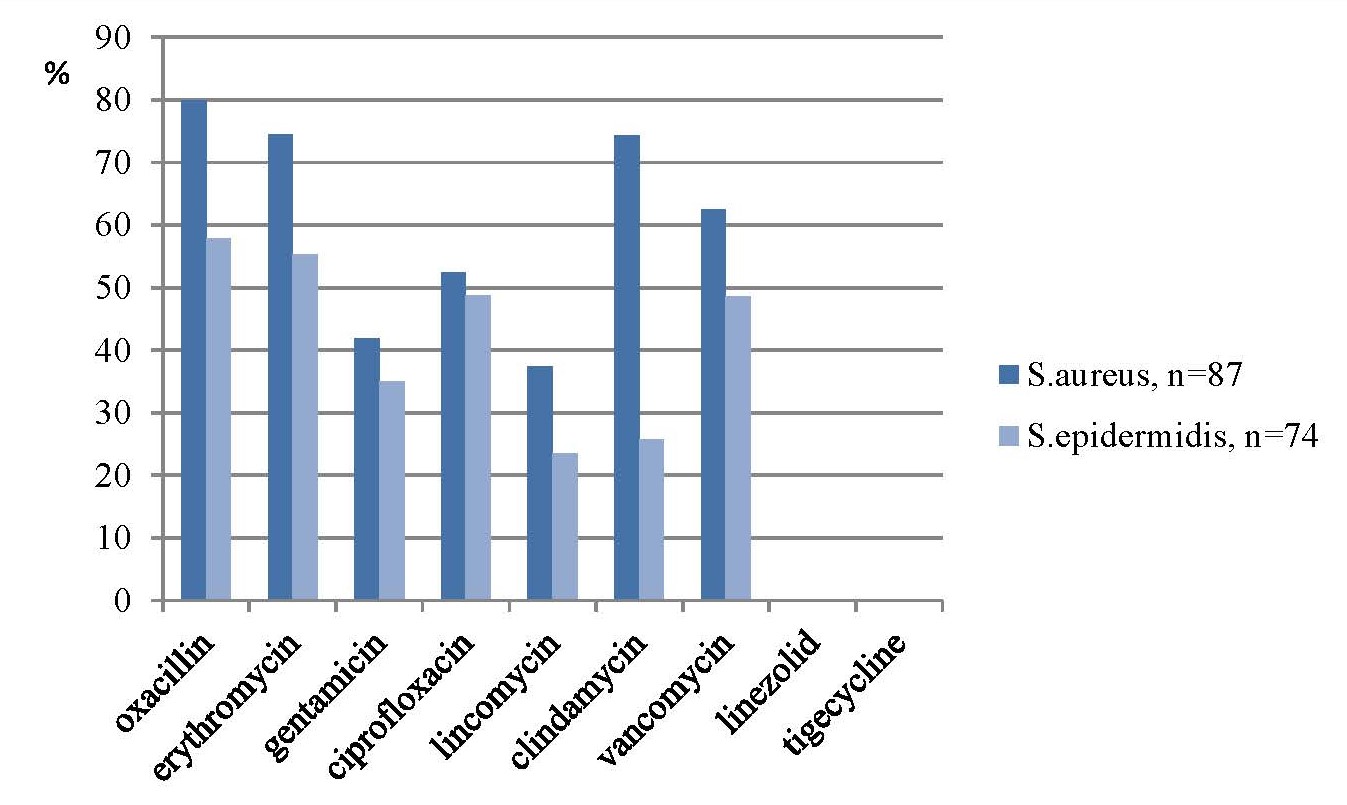 Antibiotics of the oxazolidinone group are prescribed for infectious complications caused by MRS strains with reduced sensitivity to glycopeptides. No resistant strains of staphylococcus were identified for the most widely used antibiotic of this group – linezolid. No resistant strains were also detected for the representative of the glycylcycline class – tigecycline.

The isolated clinical strains of Gram-negative bacteria were analyzed for sensitivity to 15 antibacterial drugs, and high strain resistance in Enterobacteriaceae and Gram-negative non-fermenters to conventionally used antibiotics was discovered (Figure 3). 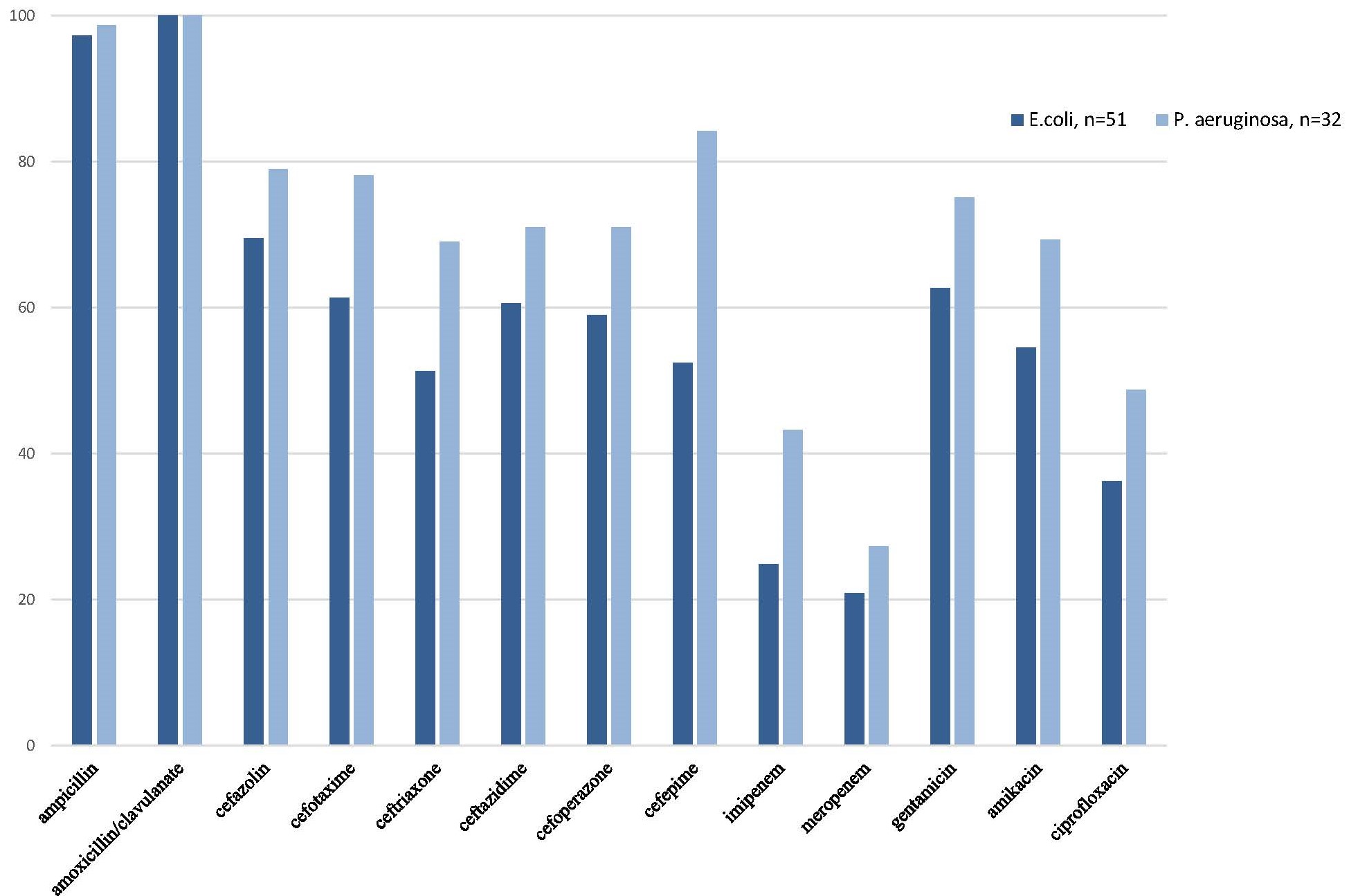 We established that the leading causative agent of implant-associated inflammation was Gram-positive cocci, represented mainly by S. aureus strains and coagulase-negative staphylococci. A tendency towards a further increase in the role of S. aureus in the etiological structure of pathogens in infectious and inflammatory complications after the primary knee arthroplasty was detected.

The widespread distribution of methicillin-resistant strains of S. aureus (MRSA) and S. epidermidis (MRSE) creates a difficult problem in terms of choosing rational antibiotic therapy due to the fact that these strains are resistant to all β-lactam antibiotics, and also have associated resistance to aminoglycosides, macrolides, lincosamides and tetracyclines.

The substantial role of staphylococci in the etiological structure of orthopedic infection is caused not only by high frequency of their occurrence and high level of acquired resistance to antibacterial preparations of various groups, but also by their ability to quickly form multilevel microbial biofilms on the surface of artificial implants. The presence of pathogens in biofilms complicates diagnosing periprosthetic infection and significantly reduces the effectiveness of antibacterial therapy, including by the drugs that are highly active against MR staphylococci [8].

isolated from patients with purulent complications in 2016-2017, and noted an increase in their role in the general structure of causative agents of infectious complications after the primary knee arthroplasty. The source of enterobacteria in the hospital is usually the patient per se, so the role of the endogenous route of infection should not be underestimated. The most severe purulent inflammatory complications were caused by non-fermenting Gram-negative bacteria, which occurred in 16.1% of cases. Their clinical significance was substantiated by multiresistance of the overwhelming majority of strains and a wide range of virulence factors, including their high adhesion capacity leading to the biofilm formation. Nosocomial strains of Acinetobacter spp. often possess antibiotic resistance plasmids and are capable of transferring them to other strains in associates, which seriously complicates effective antibiotic therapy. The presence of microbial associations may indicate an ineffectiveness of a previous antibiotic treatment, which promotes the selection of antibiotic-resistant strains [9, 10].

Identification of difficult-to-treat (DTT) pathogens, which include rifampicin-resistant staphylococci, fluoroquinolone-resistant Gram-negative bacteria, and Candida spp., is significant for the choice of treatment tactics and antimicrobial therapy [11].

The most significant etiological factors in the pathogenesis of implant-associated inflammation in post-operative primary knee arthroplasty patients are Gram-positive cocci and Gram-negative representatives of the Enterobacteriaceae family and non-fermenting bacteria.

The authors declare no conflicts of interest pertaining to the study. The study was performed within the framework of the Government procurement No. АААА-А18-118020290181-3 to Research Institute of Traumatology, Orthopedics and Neurosurgery at , Russian Ministry of Healthcare: Optimization of Diagnostic Tactics and Treatment of Latent Periprosthetic Infection in the Knee Joint Area.

, Ababkov YuV, Ermakov AM. Paraprosthetic infection as a cause of revisionary interventions after total knee replacement: Etiology, diagnostics and treatment. The Transbaikalia Medical Bulletin 2015; 2: 189-197. [In Russian].

3. Bozhkova SA. Current principles of diagnostics and antibacterial therapy of prosthetic joint infection: Review. Traumatology and Orthopedics in 2011; 3: 126-136. [In Russian].