Heading
Surgery
Article type
Original article
PDF File
Saratov_Med_J-2021-0105.pdf
Abstract
Objective: method development for preventing postoperative ventral hernias based on experimental assessment of the stress-strain properties of aponeurosis in various types of a midline laparotomy.
Materials and methods. We evaluated 42 fascia muscular aponeurotic complexes of the anterior abdominal wall. Based on the technique for dissecting the aponeurosis and its suturing, the complexes were divided into two groups (each containing 21 samples): Group 1 with a bypass of the umbilical ring on the left, and Group 2 with umbilical ring dissection.
Results. Fascia aponeurotic complexes dissected and sutured through the umbilical ring (Group 2) had, on the average, higher values of mechanical characteristics. E.g., mean values of tensile stress (S), tensile stress at a maximum load (Smax), Young’s modulus (E), aponeurotic tensile strain (D), aponeurotic tensile strain at a maximum load (Dmax), and maximum load level (Load) were higher in Group 2 by 35.4; 39.8; 14.9; 34.6; 30.2 and 40.2 (%), respectively.
Conclusion. We conducted the development, experimental application and evaluation of a novel method for preventing postoperative ventral hernias after a midline laparotomy based on the assessment of the stress-strain properties of aponeurosis.

Treatment of patients with incisional abdominal hernias is among the urgent problems of contemporary surgery due to the fact that the total number of patients with this pathology remains quite large and is steadily increasing. Midline laparotomy is the most commonly used approach in both elective and emergency surgery [1, 2]. According to different authors, postoperative ventral hernias occur in 7-24% of cases after a midline laparotomy, including 17% during the first year [3-5]. There are various techniques for suturing the aponeurosis during a midline laparotomy. In this case, different suture materials are used with various spacing between the sutures, various distance from the edge of the wound, as well as different suture types. Layering of suturing, or suturing through all layers of the wound, along with a number of other features are observed. There is no standardized technique for performing midline laparotomy, taking into account all of the above requirements [1, 6]. When analyzing the available published sources, we did not find a detailed technique description for dissection and suturing of the aponeurosis in the umbilical region, specifically, the peculiarities of bypassing the navel and the umbilical ring on the left [7-9].

The study was carried out in accordance with the Good Clinical Practice standards and the principles of the Declaration of Helsinki. The study protocol was approved by the Ethics Committee of Saratov State Medical University (protocol No. 4 of December 5, 2017).

The material for the study was 42 fascia muscular aponeurotic complexes of the anterior abdominal wall, sampled in the course of autopsy of 42 adult human corpses (13 women and 29 men) 29-88 years of age, admitted to the State Healthcare Institution ‘Bureau of Forensic Medical Expertise’ at the Saratov Oblast Ministry of Healthcare. The cause of death was most often associated with cardiovascular system diseases. Corpses of people with pathology of the anterior abdominal wall and previous surgical interventions in the abdomen were excluded from the study.

Experimental study of the anterior abdominal wall aponeurosis was carried out using an electromechanical system: the single column table model of the universal testing system Instron 5944 (registered in the State Register of Measuring Instruments of the Russian Federation under the number 43602-10) with a load cell of 2 kN, which allowed carrying out a tensile and compression experiment in same direction. The experiment was conducted on the day of receiving the material, no later than two hours after autopsy and no later than 12 hours after death was declared. Before the start of the experiment, the tissues were preserved in saline at a temperature of 5± [10-12]. 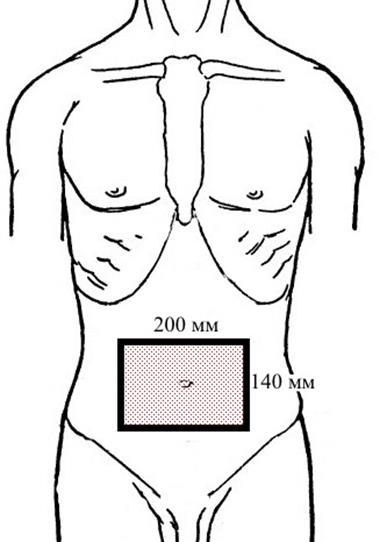 Further, the sampled fragment was dissected. From the navel area, the navel skin was excised to the scar tissue. The rectus abdominis muscles were isolated and removed from the rectus sheaths, and a single complex of the aponeurosis with its anterior and posterior leaflets and intra-abdominal fascia was formed. Then the aponeurotic fascia complex was attached to the dissecting plate for cutting the aponeurotic flap.

The aponeurotic complex was cut to obtain a standard size flap, wide and 100- long, with identical distance from the umbilical ring. For future application of pneumatic clamps, the aponeurosis was linearly marked with a dye to the right and to the left from the navel (Figure 2). 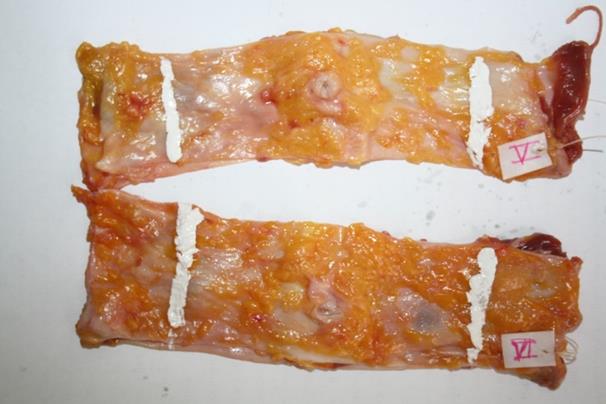 Figure 2. Samples of the aponeurotic complex prepared for dissection

To confirm the equivalence of the compared complexes of both groups in terms of their stress-strain properties, we conducted a study of intact fragments of fascia aponeurotic complexes. The sizes and markings of the flaps were identical to those of the main study groups. Tissues were sampled from the same aponeurotic complexes that were cut for the experiment; hence, we characterized these complexes as control groups 1 and 2.

The obtained sample complexes were divided into two groups depending on the aponeurosis dissection and suturing method. 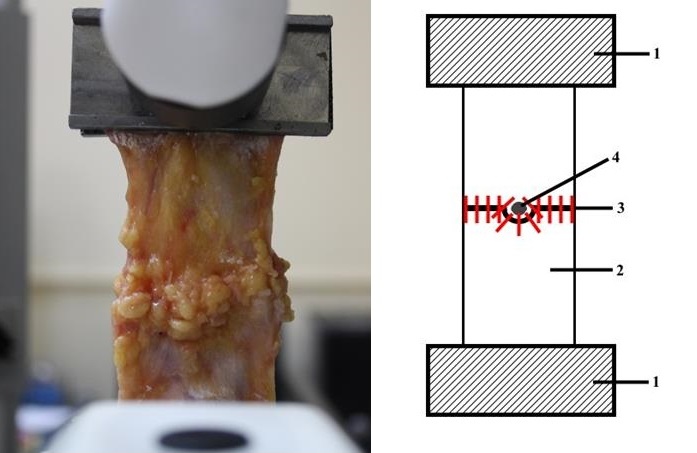 Figure 3. Aponeurotic complex, dissected and sutured, bypassing the umbilical ring on the left:

Group 2 with umbilical ring dissection contained 21 tissue samples (14 men and 7 women). The average age in the group at the time of death was 58.9 years (58.6 for men and 59.6 for women). The dissection of the aponeurosis was carried out through the umbilical ring, along the white line of the abdomen without bypassing the navel and the umbilical ring, with a straight vertical line (the patent application for invention No. 2019117792 of June 7, 2019). The navel was dissected layer by layer: scar tissue, umbilical fascia, and peritoneum. We applied holding sutures on the edge of the aponeurosis in the places, where the dissected umbilical ring was beginning and ending. On both sides of the aponeurotic complex edges, additional holding sutures were applied for further precise matching of the navel (Figure 4). This was achieved by stretching the holding sutures in opposite directions. After applying holding sutures, the wound suturing was being initiated (Figure 5). 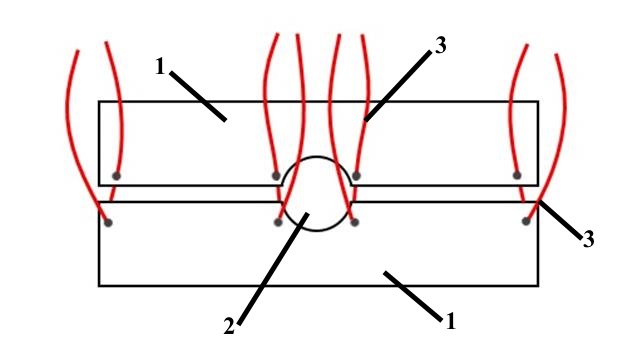 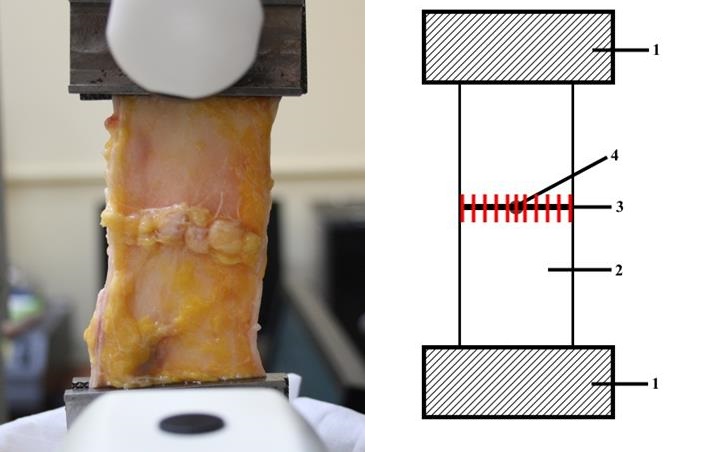 Figure 5. Aponeurotic complex, dissected and sutured through the navel and umbilical ring:

Suturing of aponeurotic tissue in two experimental groups was performed with a round needle, synthetic multifilament polyamide surgical suture of the metric size 4 (0.400-) via an interrupted suture. The step between the stitches was 5-, and their distance from the edge of the aponeurosis was 5-.

The prepared sample of the aponeurosis with an obligatory inclusion of its anterior and posterior leaflets was attached with pneumatic clamps of the Instron 5944 testing system and supplied with a load at a speed of 10 mm/min. Investigating the stress-strain properties of sutured aponeurotic specimens in a tensile strength study was carried out to identify the laparotomy type and the suturing technique with the best mechanical stress and strain characteristics. We studied longitudinal samples of the anterior abdominal wall aponeurosis, dissected and sutured along the white line of the abdomen using an interrupted suture.

Prior to the experiment on investigating stress and strain properties, the biological material was stabilized, which was accomplished by loading and unloading impact onto the material. To determine the number of cycles, the sample was loaded up until 10% deformation was achieved. On the fourth or fifth loading cycle, the diagram was getting stabilized, and the sample was showing the same behavior. These actions made it possible to identify that the number of loading and unloading cycles for the specimen under the tensile stress should be equal to six.

During the experiment, the linear dimensions of the test specimen (length, thickness and width of the aponeurosis), as well as stress and strain indicators (tensile stress, aponeurotic tensile strain, elastic modulus, and maximum load level) were recorded. The thickness, length and width of the sample were measured using a Matrix 31611 digital caliper with a measurement accuracy of .

It is important to note that the experiment was considered completed given a sharp change in the stress-strain parameters of the aponeurotic complex. Macroscopic assessment of the completed experiment was not informative, since it did not reflect the onset of tissue damage (rupture).

Statistical data processing included parametric and nonparametric statistical methods. The Shapiro–Wilk test was used to verify the null hypothesis about the normal distribution. If the hypothesis was accepted, the assumption about the equality of the means of two normally distributed statistical populations was tested using the Student’s t-test. The descriptive statistics included calculation of the arithmetic mean and standard deviation. If the hypothesis of normal distribution was rejected (at least, for one of the two compared populations), a nonparametric rank test (the Mann-Whitney U test) was used. In this case, the descriptive statistics included calculation of the median and interquartile range.

The baseline values ​​of aponeurotic parameters (length, thickness and width) did not differ significantly between groups.

An experimental study of entire aponeuroses, characterized as control groups 1 and 2, showed that they differed insignificantly from each other, and the groups were comparable by all studied parameters. When comparing the control groups with sutured aponeuroses, regardless of the dissection method and suturing technique, we have established that intact aponeuroses were more stress-and-strain resistant in all characteristics.

Table. Analysis of the differences between specimen parameter means in two groups: for normally distributed populations, in the M±σ format; if the hypothesis of a normal distribution was rejected, in the format of Me (Q25; Q75)

As for Young’s modulus (E, elastic modulus), its mean value in Group 2 ​​was 1.96 (1.20; 2.19) MPa, and this was just 14.9% higher than in Group 1: 1.71±0.83 MPa. Such results do not make it possible to assert that the averages differred significantly ​​among these groups, but at the same time they implied a higher stress-strain resistance of the fascia aponeurotic complex, dissected and sutured through the umbilical ring (Group 2).

A detailed, macroscopic examination of the complexes removed from the experiment revealed the places of the initial tissue rupture by ligatures. In Group 1, the rupture was most often noted in the place of the transition zone of a linear incision into an arched incision, while in Group 2, it was observed in the peripheral places of the sutured complex.

In this article, we considered the suture line stress-strain properties of the aponeuroses in anterior abdominal wall. A comparison was made of fascia aponeurotic complexes, dissected and sutured in different ways. Statistical analysis led us to the conclusion that, in terms of mechanical properties, the method based on the dissection of the umbilical ring is superior to the method based on bypassing the umbilical ring on the left. Hence, we have developed a method for preventing postoperative ventral hernias after a midline laparotomy on the basis of experimental assessment of aponeurosis stress-strain properties in various types of midline laparotomy and different techniques of applying aponeurotic sutures. Future studies should consider the issue of a prevention method for incisional ventral hernias in clinical practice, specifically, by means of conducting a midline laparotomy through the umbilical ring in different patients, with their subsequent monitoring during the entire period of postoperative scar healing.

3. Fedoseev AV, Inyutin AS, Muraviev SYu, et al. On the issue of suturing the laparotomy incision. In: Peritonitis from A to Z: : Proceeding of the IX Russian National Conference of General Surgeons. , 2016; 804-5. (In Russian).

10. Ioffe , Chernomashentsev AN, Yartsev YuA. The concept of biological material resistance as a promising division of surgical and functional anatomy. Issues of Morphology and Operative Surgery: Scholarly Annals of the Institute. 1971; 75 (92): 383-404. (In Russian).